It’s All About the Details

I was surfing the channels last night and one of those infomercials was on, this one about a woman purchasing a triangular piece of material that hooks on her bra in order to keep cleavage at bay.

It showed a woman wearing a low-cut top that kept exposing the girls a wee too much.  She was at her desk and a man (either her boss or colleague) was standing beside her as she tried to adjust her V-neck, low cut top, blushing furiously while dude kept casting downward glances at her bosom.

Those little camisole tops just won’t do because as the woman demonstrated, one is always having to adjust, tuck in, and well, it’s just a nuisance.  Cami Secret was born, which is basically a dickey for the breasts.  (By the way, it can be spelled dicky, dickie or dickey), but men have had it for years — either a turtleneck version or something that looks like a shirt, but isn’t.  It’s an insert that looks like a shirt, a “false front.”  According to Wikipedia, men have been sporting them since the 19th century.

I began to wonder how this invention came about.  Here is the Cami Secret: 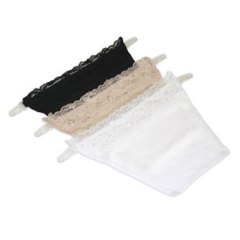 Did a woman (or man) for whatever reason wake up with a pair of lacy undies on her/his chest, look down and a lightbulb comes on over her/his head:  Dickey for the Breasts!  Cut off the the sides, back and crotch and Voila!

Or, maybe they just adapted the men’s version.  I like the above more romantic/creative version though and why did it take so long for this to happen?  Not that I plan to buy any because I seriously don’t have to worry about that, but I bet some ladies probably will.

I mean, a woman sewed material around a rubber-band and the scrunchy was born and she made millions.  I wore them — alot of women did.  It was the fashion accessory of the 1980s and early 90s.

You know that idiom, God is in the details or the devil is in the details?  Meaning, something is hidden within all the things we already have, that are all around us.  Some great (and not so great) idea or invention just waiting to be born.  We just have to look for them.  I don’t know who invented this little triangular piece of cloth, but she/he found the dickey in the details.

Obviously, my creative musings are at an all-time low today, so I’m off to look for some details and if I come up with something, I’ll be sure to let you know.

73 thoughts on “It’s All About the Details”