//
you're reading...
Literary Ramblings and Thoughts, News Worthy, Other Musings, Why Not?

Had to do this one as a followup to my Friday post going on about dancing — when to and when not to, who should and who shouldn’t.  It really was all in fun but I found myself doing some dancing this weekend, in public, so I ate those words.  I knew I would.

We went to see Stevie Nicks over the weekend.  It was PHENOMENAL.  If she comes to a place near you, I advise you to get tickets posthaste, because Ms. Stevie was a  sold-out concert.

Alex and Todd (from Maine and Boston) some Stevie fans. In the parking lot before it all started…

Before walking inside, everyone was in the parking lot doing their tailgating thing.  Chairs set up outside of cars and trucks.  People with coolers having a libation before entering.  Fleetwood Mac playing.  As hubby and I were toasting, a car drove by and a guy smiled brilliantly and yelled at us as he and his friend passed by, “Oh my God, Stevie Nicks, do you believe it??!”  Their positive vibes were catching and they joined us for a time before we all walked in and parted to embrace the greatness of Stevie.

Before nightfall and before Stevie floated onto the stage…

It was in a gorgeous setting.  We snapped some pics of the stage and what was the backdrop to Stevie.  Ocean, cloudless sky, nearly full moon and some stars that showed up, I’m sure just for her.  (Pardon the pics, we were far from the stage and only small cameras and camera phones were allowed in).

I’ve always loved Fleetwood Mac and Stevie Nicks was always the center of all that groovy goodness.  Spinning around with all that hair, lace, fringe, funky sexy and platform boots.  She may not spin around as much as she once did (she is 64 years old!!!) but she is still Stevie, better than ever. 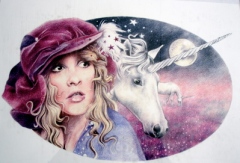 What mythical, magical creature wouldn’t stand alongside her?

Her voice is pure, beautiful, the same as it always was and she does flow and dance around on the stage, not only with her legendary goddess-like grace but with the added elegance of a woman who has earned that kind of status.  She dresses as if she’s about to gallop away on a unicorn.  So good.

The music, the night and sitting beside and and dancing with my love reminded me how crucial it is to keep that part of yourself — that fun thing — that which makes you remember just how good and precious life is.  In case you haven’t noticed, music is a big part of my life — it always has been. 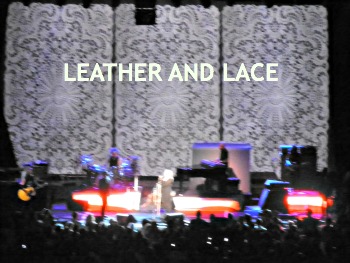 As close as we could get. That is her with a young guy singing Leather and Lace (he did the original with Don Henley justice) Standing ovation justice.

Music can transport you back in time where you literally feel like you are that person you once were, before you “grew up.”  But, really do we ever?  My Dad told me once:  The funny thing is you always feel the same inside and you look in the mirror and you think what happened?  It catches up to you, life and worries, being a “responsible adult,” all that gets in the way sometimes until something slaps your psyche and screams at you:  Hey, you remember fun??

Stevie sang several of her songs that she’s known for:  Gold Dust Woman, Stand Back, Dreams, Rhianna and of course, Landslide where the ENTIRE audience sang along with her.  But she introduced some new ones, including Soldier’s Angel (written for the time she spent at Walter Reed Hospital — read more about that here).

She ended the concert with White-Winged Dove, dressed in a white, feathery thing of course, then came back once and finished with her new song, Love Is.  She ended the concert, very emotional, by telling everyone she’d had a very rough five months and that doing this and the crowd’s welcoming adoration made her feel like “herself” again.  I’ll just bet she was transported back too.  She certainly seemed as if she was having fun and that energy affected everyone.

So, go out and do something this week that is FUN, schedule, pencil in some fun.  Sweet, crazy glorious fun — whatever your definition of that is and you know I have to, press play below to listen to a few Stevie tunes.