//
you're reading...
Literary Ramblings and Thoughts, Other Musings, Why Not?

Gravity Wants to Bring Me Down

As I grow older, I’m learning more and more about the acceleration of gravity.  I think women are more aware of this than men are and we all know the reasons why so I won’t go into that.

Oscar Wilde exemplified the desire of youth, narcissism and vanity to the nth degree in the novel, The Picture of Dorian Gray.  The movie, Devil’s Advocate played on that same theory about vanity — remember the Devil (Al Pacino) at the very last when we thought Keanu Reeves’ character had learned the lesson, but he again fell victim to that human foible — vanity?  The reporter at the end of the movie morphed into the Devil saying, “Vanity — definitely my favorite sin.”

It’s the favorite “sin” of the plastic surgery industry as well.  A 2012 Huffington Post article reported that Americans spent $10.4 billion on cosmetic surgery last year.  Despite the recession, economic downturn, unemployment rates, we obviously still want to look young, beautiful and thin.  According to an article from the Los Angeles Times, women get 91% of those cosmetic procedures but dudes are beginning to get more — their focus is their face, with facelifts having 14% increase in 2010.  Still, women obviously are leading the pack.  Ouch.

What Do Women Want??

My “formative years” as a woman were the 80s and 90s.  Call me crazy, but the celebrities we looked to for fashion and beauty — those looks were far more obtainable that the ones we see now.

Is it me or do you see a difference?  Both are gorgeous twenty-something’s (because that’s what you are when you’re in your 20s!) but Jennifer Beals at 20 has normal hair, skin and lips.  Megan Fox at 26 has hair extensions, poutier lips and really, really white teeth.

Every time I see those hair commercials with women, whatever their age, with luxurious locks, my rational brain knows it isn’t really their hair but my irrational one thinks, umm, will this product make my hair look like that — really, really??

I’m not sure where I’m going with this.  Maybe it’s a reflective diatribe about how we, as a culture, have gone over the edge of reason as far as staying and looking young.  I once did a four-part series for a local newspaper about cosmetic surgery.  I interviewed several women in their 40s and 50s who went through facelifts and other procedures.  They said they did it because people kept telling them, “You look tired.”

They said they didn’t feel tired so they wanted to look the way they felt inside.  Don’t we all?  Isn’t that the weird thing about aging?  We feel the same inside but the natural order of things is that we, well age.  When I asked each of them, “Would you do it again?”  Most of them said, yes after a bit of hesitation but all said, the recovery was far worse than they thought it was going to be.  One gained twenty pounds after surgery.

I’m not against cosmetic surgery — if a woman does so, for the right reasons, I think that’s great and she’s far braver than me.  In five years I may fold, give in.  But probably not because I’m terrified of being put to sleep and someone cutting on my face and then having to wrap bandages around my head and face while the bruises heal.

I once met a woman at a party who was in her 40s and her face startled me.  It was so tight to the point of mask-like and I wondered why she did that. I feel certain she was “pretty” before she decided to do that.  And she didn’t look younger, she looked like a woman in her mid-40s with a face devoid of wrinkles — anywhere.  I personally think that’s when a woman is her most beautiful — 40s and 50s — when she discovers who she really is.

Maybe we should just accept the fact that gravity is inevitable and that it’s gonna happen no matter how much we fight it.  I probably won’t age gracefully.  I’ll moan about how this or that isn’t what it used to be, but when I smile, I want my whole face to be in it.  I’ve got pictures of my mother (who was gorgeous when she was a young woman) and she still is, just in a different way.  She’s in her 70s but when she smiles, it can light up a room.

That’s who I want to be.  In the meantime, I’ll keep slathering on those moisturizers and doing what I can to rage, rage against the dying of the light.

What do you think?  Have we gone too far with our ideas of beauty and youth?

Press play below.  Despite the fact that John Mayer does weird things with his mouth when he sings and puts his mouth all over the microphone, I love this song.  Bet you can guess what it is. :).  Have a great weekend. 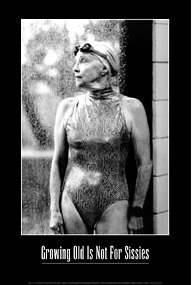 From the book, Growing Old is Not for Sissies

Writer/Editor/Wanderer
View all posts by Brigitte »
« Get Up, Get Out, Get Going — Hump Day is HERE
Monday Musings and Motivations — Part Sixteen – Purpose »

69 thoughts on “Gravity Wants to Bring Me Down”