As most of you probably know, I’m not from the place in which I currently reside.  I live on Long Island, Long Guyland, as many of the residents here call it.

Local accents can range from none to Joey Buttafuoco-esque, if ya know what I’m sayin.  I would say, “If yew know what I-I-I-I me-an.”  Southerners are notorious for dividing one-syllable words into two and really dragging those ‘I’s” out.

Billy Crystal, a Long Islander who grew up in Long Beach. Love him.

Joey Buttafuoco, another Long Islander. Yo.

Many times people will ask me, “Ya not from heah’, where ya from?” I personally don’t think I have that much of a Southern accent anymore but people from Long Island and Manhattan can pick up on those nuances in a New York minute.  One of the best things about living near Manhattan and on Long Island is that you can enjoy a range of accents from any and everywhere — here, there and all over the world.

We live twenty-two miles exactly from the Empire State Building but try getting there in a car and you’ll spend the entire day driving to and from it.  All that traffic, the bridges, tolls, horns — I was terrified the first time I missed an exit and wound up in Alphabet City in New York.  But hubby and I visited the massive Trader Joe’s and Trader Joe’s wine store and we managed to get back to Long Island, unscathed and happy with our purchases.  We just take the train now.

You can find stuff like this in a bodega.

Long Island is full of hamlets, villages, townships and they all run into one another and some of them are beautiful and charming — like little Norman Rockwell villages.  There’s bodegas, which contain stuff that looks as if it’s from the 70s and it never sells. I don’t know why it’s there, nestled and cluttered around all the rolls of lotto tickets.  I still don’t know all the ways you can play the lotto here.  It’s very confusing to me.

There’s a bazillion diners, here on Long Island and in Manhattan.  Some of them are big, some of them, little slivers of buildings tucked in strip malls between a laundromat and a dry cleaners or a bodega and bakery or a sun-tanning place and a meat market.  They all have personality and it’s fun to visit them.  Listen to the patrons and listen to all the dialects that swirl around within them.

I have a favorite here on my Island of Long.  It’s at the “Merrick Mall” which really isn’t a mall, not the kind you think of.  There’s a pizza/Italian restaurant, a CVS, a Stop and Shop and a laundromat.  It’s modestly called the Merrick Mall Diner and it’s been there for over thirty years.  Owned by a wonderfully fabulous Greek family.

Merrick Mall Diner. I go in the back entrance usually.

I love my Big Fat Greek Diner.  There are more upscale ones here but this one — these people, they took care of us when Sandy blew into our coast line last year.  Hubby and I would go frequently, eat lunch, drink gallons of coffee and check and send emails, make phone calls.  The owners had other members of their family there at that time, helping out to serve the influx of customers.  Their young daughter from Manhattan was there.  She was going to law school, but had come in to help out.  It was warm and there was a wonderful sense of community.

We are Greek!  We are Loud! 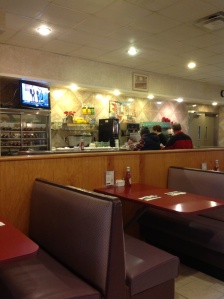 The ambiance in my Big Fat Greek Diner is superb.

I’ve been back many times since last year.  Every time I walk in, I’m greeted by the lady of the establishment, a dark-haired, nicely coiffed and dressed woman.  She always wears gold hoop earrings and a heart-shaped necklace sparkling with tiny diamonds.  She welcomes me with a “Sit! Sit…wherever you want, wherever you want!”

The first time we visited we had been scarfing down some fine food.  The men that are always there were over at the counter, gesturing and speaking loudly in Greek.  The lady comes over and says, “We are not mad, we are loud — we are Greek!”  I freaking loved that.

It’s like that every time I visit.  Earlier this week, I drove to the gym and on my way home, I stopped in for one of their lunch specials, taking my computer to write.  It’s a great writing place.  They have free Wi-Fi and I’ll walk to my back booth, maroon-colored vinyl with formica tabletops and a patterned maroon cloth back.  It’s very comfy.

Mrs. Greek walks up to me and asks politely, “Whot may I git for you?”  I questioned her about the specials, drawn to the hamburger and fries.

“It comes with soup or salad, wich would you like?” She asks pleasantly, waiting for me to decide.

“What kind of soups?”

I’d already eaten the cup of chowder and taken a bite before I thought to take a picture. It’s great and around nine bucks — the whole thing — with tax.

I chose the chowder and she brings me iced tea (free refills) immediately.   Soon my feast sat in front of me.

Meanwhile, the two men, one dressed in a blue plaid shirt and ball cap, wearing a gold chunky chain, spoke to the other man in a bright red windbreaker with some kind of crest on it, also Greek.  They spoke loudly, throwing their hands in the air, gesturing excitedly.  Not in anger, just trying to explain their point of view, I’m guessing.

I settled in and ate, enveloped in that warm and cozy place, television noise and wonderful Greek dialect serving as soothing background chatter as I tapped away on my laptop.

None of them have ever asked where I’m from.

(By the way, the word, “dialect” comes from the ancient Greek word “diálektos,” meaning discourse — and banter too, I’m thinking.)

“There’s two kinds of people: Greeks and everybody else who wish they were Greeks. Give me a word, any word and I will show you how that word comes from Greek!”
Michael Constantine, from “My Big Fat Greek Wedding,” one of my all-time favorite movies.