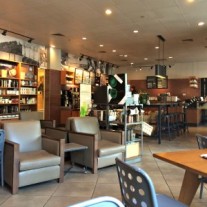 Not crowded yet, but good music and coffee. Plus it smells good in here.

I walk into a coffeehouse, specifically one that is global and serves happy hour libations in some areas now. It’s early afternoon and I wait in line, only one person in front of me and then it’s my turn.

“I’d like a Venti Decaf.” My usual is a Venti No-Fat Vanilla Cappuccino but if I order that, I’ll be up all night so I go for the decaf.

“We have to make it on the Clover,” the woman says as she talks to the baristas beside her and then looks at me and smiles.  “We stop brewing after one o’clock.”

We make small talk; how beautiful the weather has been lately.  Have you noticed that when you trade small talk with someone you don’t know, the main topic is usually weather?

I ask if I can transfer a balance that’s on a card I use for buying this elixir onto my phone.  “Sure.” She taps on the register keys and says,  “Put your phone up to the scanner.” 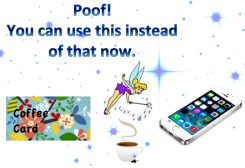 The magic scanner transfers it to my phone.  She doesn’t ask for my name to write on the cup, instead she scribbles what it is I’ll be drinking.  I hover near the counter and for the time being, I will be known simply as Venti Decaf.

A twenty-something female finishes up someone else’s order:  Grande Mocha Latte with whipped cream!  I wait while she clovers my coffee.  There are thumps and bangs, she wipes things.  She looks up when I say, “How’s your day?”

“Good.” She smiles at me, asks me what it’s like outside and tells me I’m off in about ten minutes.  I tell her it’s a beautiful day.  There’s that weather thing again.  I ask her where she’s from.

I tell her my family lives there and we learn that we both once lived in Midtown, an area that lays claim to The Shell where many a musician has played since it was built in 1936.  She lived on Idlewild, me on Peabody.  I tell her how I sometimes I miss the flavor that is Memphis. 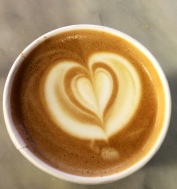 I didn’t have this because of the time, but this is pretty, isn’t it?

“That’s it,” she says.  “People don’t know understand this about Memphis.  They only think about the bad things, but it has a flavor to it. That’s it!”  She and her husband recently moved here and we talk about that, how our situations are similar and what we like and don’t like about here.  We reminisce a little more and she hands me my coffee.

We know each other’s names now, but I’ll call her Memphis from now on and the next time I go in there, she’ll remember me, tell me she told her husband about how I got the flavor of Memphis.

Instrumental music is playing, one of those songs with whistling in it that was popular in Pulp Fiction and Kill Bill-type movies.

I score the best table, the one in the corner where you can see everyone coming and going.   Someone gets up as I approach.  He hurries past me, talks on his phone and throws a cup and napkin away as he exits.  I wipe the table off, pull my laptop out of my bag, plug it in, scoot a chair next to me and put the bag and my purse on it. 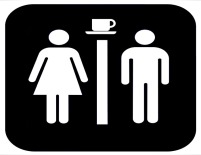 Proper Coffee House Etiquette: To watch another patron’s stuff when she/he leaves the premises for short periods of time, including but not limited to bathroom duty/watch.

A young man sits to my right.  He’s resizing a text box on what looks to be a website he’s working on and then clicks over to another window, perusing a college website, Clemson.  He turns to me and says, “Can you watch my stuff?”  I tell him yes.

He walks to the bathroom.  He has sandy-colored hair and wears a white shirt with light gray stripes and jeans. We establish a watch-my-stuff thing when he gets back for whenever one of us has to get up and go somewhere.  I call him Clemson in my mind.

I look up and watch Memphis walk out the door, anxious to go somewhere else or meet someone.

I write.  When my eyes need rest, I pull my glasses off and look around.  Observe. Listen. Try to come up with a word that describes how tree frogs sound.  I settle on ba-deep and stop typing.

A devil-may-care kind of cap he wore, sans cigar and he didn’t look like Paul Newman.

An insouciant older gentleman sits at one of the small round tables against the wall.  He pecks on his laptop, hunting for the keys he needs, looking down, then at the screen. He wears an English driving cap and he sings along with Dean Martin, That’s Amore! and isn’t timid about it.  He doesn’t look at anyone.  He just sings and sings, knowing all the words.  I smile because I think that’s great.

A man dressed in a suit puts his coffee on a table, pulls out his cell phone and starts talking to someone, trying to keep his voice quiet and failing miserably.  “So I just have, you know…I will explain it to them.  I don’t want to burn any bridges…yeah, yeah,” he listens to whomever’s response.  I tune him out.

“Watch my stuff?”  Clemson asks me.  A young woman wearing tight peach-colored shorts with her hair in a ponytail waits for him, her body already turning toward the door.  He tells her about our agreement.  She doesn’t look at me, walks out the door.  I smile at Clemson, give him a thumbs-up.  He follows peach ponytail, out to her car I’m guessing.

Two tall blonde women walk in, laughing unselfconsciously and loudly the way young women do, all squeals and no ways!  One wears turquoise capri pants and a white tank top, the other black shorts and a flowered shirt, made of something thin and wispy. 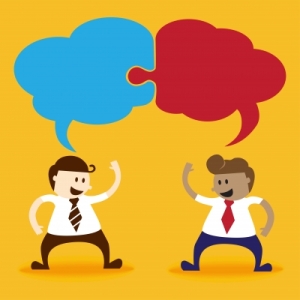 Testosterone Exchanges: Occurs in public venues. Can include high fives, smacking of hands on hands and shoulders and excitable utterances such as Hey Man, Yeah Man, Dude, as well as guffaws and other loud exchanges.

A man dressed in blue scrubs sits at a table behind the older cap man now, staring at his screen.  He looks up when another man walks up to him and says, “Hey man!”  They smack and slap hands the way men do.  “Good to see you,” one of them says to the other.  “Yeah, man, you too.”

They laugh and talk about some night they did something and what someone did and then laugh and yeah, man! more.  They smack hands again before they part ways.  Blue scrubs, who I determine is the alpha male, goes back to his computer.

Older cap man leaves, singing as he does.

Four leather chairs, in rows of two, dominant the middle of the shop.  In one, a middle-aged sunburned man slumps, his legs splayed out in front of him.  He looks angry but maybe it’s the sunburn.  He wears khaki shorts and a red plaid shirt.  He pulls a paperback out of a bag and begins to read.

In the other row, a girl sits cross-legged, eating a cookie and drinking amber-colored tea.  She has headphones plugged in and she pecks on her laptop, the Apple glows as she does.  She shakes her head slightly every once in awhile,  Is she reading an email?  What is she disagreeing with?

I go back to my writing and everything is background noise.  I look up occasionally, get up every once in a while. Clemson watches my stuff when I do.  One of the women who works at the shop comes to wipe up people’s drips and asks Clemson if she could move one of his tables.  I’d not noticed he had two scooted together.  I don’t think he did either.

He apologizes for taking two tables and the woman moves a table over to a gray-haired man who wears orange earplugs and has his computer balanced on a tall stool.  She moves the stool back to its proper place, underneath a long, tall table where no one sits.  Clemson and the gray-haired man trade pleasantries.

The gray-haired man has a satchel draped over his shoulder.  His laptop displays what looks like geological measurements, pictures  There’s some kind of black rectangular thing attached to the top of his computer and a smaller square device attached to the lower left corner.  I want to ask him what they are but I don’t.

I write for another forty-five minutes.  Clemson has left by now so I have no one to watch my stuff.

I think to myself that all of us, here on this day—coming and going, staring into computers, pecking out pieces of our psyches, reading, socializing—we’ve come here to do this.

Connect, if only briefly.

I unplug, pack up my stuff and leave.

Happy Monday everyone and what connections have you made lately?  What’s your favorite coffeehouse music?  Do you like the idea of coffeehouses having happy hour?

What’s your coffee drink name—does it differ according to time of day?

P.S.  Enjoy some music.  It’s what was playing when I left.