Oh love! Poets and writers have attempted to describe it since the beginning of time. I don’t know for certain but I’ll bet there’s some hieroglyphics written on a rock somewhere about it.

Love can render us speechless, have us act in ways we never would and scientifically speaking, it has the same addictive effect on our brains as drugs do. According to one study, love can paralyze us, in terms of decision-making and make us feel well, kind of stupid, when we’re in the throes of it.

The culprit? It’s those dopamines swirling around inside our brains, dancing all over the ventral tegmental area, the “reward circuitry” portion of our grey matter. This is where the party happens, the place where intense emotions (and psychiatric disorders) are highlighted when we experience them.

No wonder Plato referred to love as a “grave mental disease” and John Ford called love “desperate madness.” It feels so good and it hurts so good.

What Becomes of the Brokenhearted?

We’ve all had our hearts broken at one time or another. My first heartbreak was in grade school. I was in the third grade and my boyfriend, let’s call him Adam, had chestnut brown hair and blue eyes. We passed notes in class. It wasn’t as if we announced our love, it was just understood in that way third-graders have of understanding love; giggling, teasing, a tug of the hair, shunning others who vied for attention—that kind of thing. 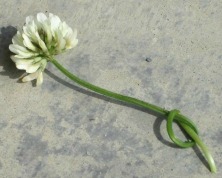 A string of clover flowers, bound by love.

Adam presented me with a string of clover flowers twisted together one day at recess. I tied the ends together and wore them as a necklace.

“I like you,” he said before running off and screaming with a passel of other funky-smelling little boys. I was the envy of the other girls in my class.

My blonde hair sparkled in the sunshine that day and my freckles, being the bane of my existence, even felt beautiful. Colors were brighter, birds sang louder, and I skipped back to class while thinking this:

Everything changed the next week.

My glasses arrived. This was when you actually had to wait for something to be made. I know, weird, right? Three-D printers can make ears now. 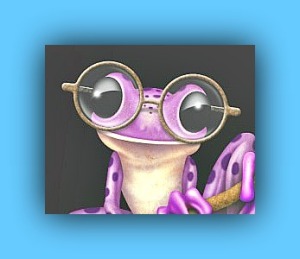 How I looked, but my glasses were blue and cat-eye shaped.

I slithered into class, my head down. I heard whispers and a few giggles. I surreptitiously glanced at Adam. He looked startled when he saw me and quickly turned away. A boy next to him punched him and said something. They both laughed. Adam didn’t look at me at all after that. No notes were passed.

At recess, he ambled over to me. I was with my posse, he with his. He stood in front of me, he poked me in the arm with his finger and said: “You look like an ugly monkey.”

It had come to this.

The day dragged on and I couldn’t wait to get home. When I did, I cried and thought this:

My sister, three years my senior, found out about what went down in the schoolyard. She sat down on the bed next to me, as I cried. My necklace of flowers lay broken and crumbling (like my heart) on the nightstand beside me.

“Don’t cry, Brigitte. He’s stupid anyway. I’m going to take care of this.” She kissed my forehead and snuggled the covers up around me.

Like this but without any physical harm or psycho-ness.

The next day at recess she walked over to Adam, as he stood talking to his minions. She got all Hand that Rocks the Cradle on him, grabbed him by the sleeve and lowered her face down to his, about an inch away, and snarled with voracious venom: “Don’t’ you EVER call my sister an ugly monkey again, you got it?”

Adam, humiliated by her, a sixth-grade girl, in front of his boy pack, well, he never called me an ugly anything again.

Our love, however brief, was ill fated. Because sometimes it’s like this:

“Then there’s the story of ill-fated love. It’s universal.” –Rita Moreno (Moreno said in an interview to the NY Post about her obsessive love of Marlon Brando: “I remember how he spoke to me, how he played the drums, how he made love . . . and how I almost died from loving him.”)

Okay, so maybe childish love can’t be compared to mature love, especially puppy amour. But the same things go on in the brain. The euphoria of falling, that precious first swoon, the way the heart flutters, the stomach roils, and the mere sight of the beloved makes the breath quicken. There’s nothing that compares to it.

There’s even a bittersweet aching of letting go when it goes wrong, of heartbreak—it’s the stuff songs and books and poems are full of. It prepares us for the next love and/or heartbreak. We learn who to give our heart to and who not to.

When we do fall in love, the real kind, it’s different. In the beginning, it’s the same but it sticks. It doesn’t fade after all that intenseness. The ups and downs of love level out to a sweet cadence. When you find it or it finds you, you guard it with your life.

One can’t maintain that “desperate madness” for extended periods of time. But love, true love—the falling, the getting to know each other, the settling into a rhythm, and the growing old together is priceless.

And good news, another study conducted in Paris (ah, the French and romance, oui?) found that some older couples in love, when shown a picture of their partner, had the same activity in the love-gasm part of their brains as young people who were deeply in love do. Je t’aime! Tu es l’amour de ma vie.

Go old along with me! The best is yet to be…”–Robert Browning

We can write about it all. Immortalize it in stories, songs, poetry, and memoirs. It’s universal and the best thing about being human.

Do you remember your first love and/or heartbreak? What are some love songs you like? What’s your favorite love story?

Happy Monday everyone and celebrate the love in your life. Enjoy a love song from the 80s. Yeah, that’s right—the 80s.