If you look back at some of the best moments of your life, you’ll always find laughter. Laughter can make your heart swell and pump with vitality. According to the Mayo Clinic it can do all this:

That feels good and that’s just for the short term.

Laughter, my heart beats for thee.

But, according to a study on WebMd and a psychologist by the name of Provine, “…evidence that laughter has health benefits is iffy at best.” 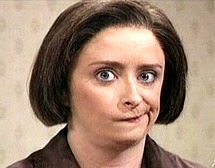 I’m glad laughter boosts the immune system but with most processed foods having huge amounts of sugar, obesity has become an epidemic.
Wah, wah, wah…
(Debbie Downer from SNL)

He goes on to add:  “Laughing more could make you healthier, but we don’t know,” he says. “I certainly wouldn’t want people to start laughing more just to avoid dying — because sooner or later, they’ll be disappointed.”

Why Do We Laugh?

One study suggests that we’re hardwired to laugh. We used it as a form of communication millions of years before we could speak. Babies laugh and they don’t understand jokes.  Other studies show we laugh “30 times as much when we’re with others than when we’re alone.” I know I always want to watch a comedy with my hubby or friends instead of by myself. Laughter is contagious and I don’t need to read a study to determine that.

I have no idea what you’re saying, but you’re funny.

But what about laughing when we’re not supposed to?

When I was at my Dad’s funeral almost two years ago, I was sitting with my family in uncomfortable wooden pews as people filed in to pay respects. Music was quietly playing over the speakers and a hymn came on, the kind that makes you want to stick a fork in your eye, and one that did not sound like my Dad.

That hymn did not sound like him. Not even a little bit. The term, caterwauling, comes to mind.

I pictured him in my mind, with one eyebrow raised, saying, “Brig,” in that way he always did.  Then he moved both eyebrows up and down before breaking out into laughter, a good, good belly laugh.

I had to bend over to hide my face. My body literally shook with laughter and I’m sure most there thought I was crying. I was crying, sad, yes; but I was laughing my ass off at that moment. I mean holding my stomach, tears in my eyes, fearful I couldn’t stop and gain my composure kind of laughter.

Laugh Til’ It Hurts

I love the kind of laughter that hurts, where you can barely catch your breath.

When we lived in New York and were experiencing the aftermath of Hurricane Sandy, we’d venture out during the day. Hubby had time off and we had no electricity and no service of any kind. We’d have to drive to another town to get cell service and warmth and would spend hours in a diner or at Starbucks with others who were doing the same. We’d listen to these horrible stories of people losing everything. There was bleakness and sadness, but a strange grateful camaraderie was blended in with all of it as well.

This particular day was about the fifth day of “roughing it.” It was around 4:30 p.m. and getting dark. We had to go back to the cold, dark house where we’d light a fire in the fireplace, burn candles and huddle with blankets until we fell into a uncomfortable sleep while helicopters shined their lights into yards to make sure people were safe. Anyway, as we both got into the car, Hubby looked over at me and sang loudly:

Back to land of the ice and snow with the midnight sun and the cold winds blow!  Then he waved his arms around, threw his head back and screamed this:

I know, it’s not the correct lyrics to Zepplin’s Immigrant Song but it worked to lighten the mood.

We both laughed so hard, it hurt. But it was a stress-reliever and levity, we needed it badly.  Laughter was the medicine that made us sleep a little sounder that night.

Good Times, Bad Times, You Know I’ve Had My Share

I seem to be relying on Led Zepplin to get my point across which is this: Laughter really can save you from tragedy and make your heart and soul feel hope and joy again. Maybe, it doesn’t just heal broken hearts and spirits but physical ailments as well.

Whatever it may do or not do, it still feels so good. And we can always use more of that.

What makes you laugh? Have you ever laughed at an “inappropriate” time? What are some of your favorite comedies? Movies? Shows? Jokes?

Enjoy (you’ll have to watch an advertisement first) one of the best movie laughs EVER, from The Money Pit and if you want, listen to the Immigrant Song afterwards. I’m here to entertain.

Laughter and tears are both responses to frustration and exhaustion. I myself prefer to laugh, since there is less cleaning up to do. — Kurt Vonnegut

Why We Laugh. It’s more complicated and bizarre than you might think.

41 thoughts on “You Gotta Laugh”